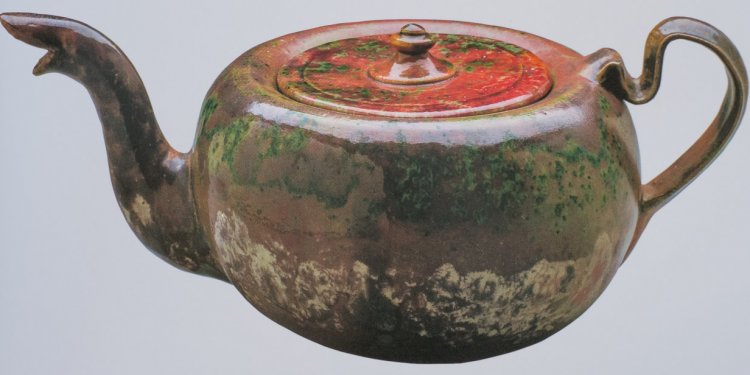 The relationship between hands and clay is the basis of the ceramic art form. When you put your hands to clay, the natural inclination to form, shape, and ultimately create something from the fine-grained soil is inescapable. Handbuilt objects can be produced by pinching balls of clay, joining slabs, or creating coils. “Handbuilding, a combination of coil, carving, pounding, and squishing, has taken center stage in the art world, ” says Adam Welch, an art lecturer at Princeton University and director of Greenwich House Pottery, the oldest non-profit ceramics studio in the country (since 1909). “It seems most adequate to fight the slickness of conceptual art and most adaptable toward a return to an inner impulse.” And while certain vessels would be easier to achieve using one of these processes over another, Welch notes that “it all depends on style, taste, and one’s tolerance.”

Khnum, the Egyptian deity of water and pottery, was believed to have created the first children using his potter’s wheel and clay from the banks of the Nile. This Egyptian statuette from ca. 3500–3400 B.C., in the Predynastic period, was not made with a potter’s wheel, however. In this era, Egyptians employed the pinching method to create remarkably thin-walled vessels and representational figures out of hollowed-out pieces of brownish-red clay also known as terracotta. After the object’s final form was pinched to perfection, it was dried in the sun, polished smooth with a stone, and painted to endow it with features such as hair and clothing. This female figure’s small, pointed head may be an exaggeration of the nose to symbolize “the source of the breath of life, ” as described by the Brooklyn Museum, where the work resides.

The American artist Betty Woodman’s contemporary work invokes the ancient traditions of the ceramic arts in Egypt, China, and Greece, imparting new life into vases, pitchers, cups, and the human form. Woodman’s “Pillow Pitcher” series is not only inspired by the Cretan pitchers from the Minoan civilization (about 3000–1100 B.C.), but is created as if from that era, mimicking the basic technique used to create them, and also featuring elaborate designs. To create a pitcher, Woodman pinched two cylindrical pots together from one end to the other horizontally, then concealed the jointed area by wrapping a strip of clay around the middle section, which also forms the pitcher spout and handle. After drying, firing, and glazing, she painted the vessels in the styles of Matisse and Picasso.

Many contemporary artists working with objects depend on assistants to execute much of their work, but not 86-year-old Woodman. “I have a deep-rooted love for ceramics and a passion about it and a knowledge of it. It’s just part of who I am, ” she says. “I really like doing my work myself. I’m not interested in having somebody else do the work.… It’s about my touch and my hand.”

Shape a piece of clay into a smooth ball about the size of your hand. As you hold the clay sphere, press your thumb into the center of the ball, about halfway down to the bottom. As you revolve the ball with one hand, press the walls out evenly with your thumb on the inside and your fingers on the outside. Smooth the surface with a damp sponge.

Found in Indian and Mesopotamian architecture, ceramic tiles are believed to have been constructed from slabs of clay since 14, 000 B.C. Effigy urn in the form of the Sun God from 12th–14th-century Mesoamerica is formed from a slab of unglazed clay (also called earthenware). The figure’s elaborate garb, jewelry, and headdress represent the god’s divinity—as the protector against everything from drought to illness. In ancient Mayan culture, slab-built lids and bases for vessels, boxes, and incense burners were used alongside coiled pots and clay slips to create the intricate decorative arts that the Mayans are well-known for.

California artist John Mason, one of the leading advocates of ceramics as a fine art, has been engaging in slab construction for more than 50 years, creating modern ceramic totems that can only be fully appreciated in person. Mason’s “Figure” works are the result of rolled, shaped, fired, and glazed slabs of clay positioned meticulously on top of one another in geometric formations. “There was the question of whether it was going to be a unique object or was it going to be a tool with which you explored the possibilities of the material?” Mason says of the many contingencies inherent to the process of slab construction. “Which meant you didn’t necessarily know where you were going or how you were going to get there.… Clay has a tendency when it’s plastic, when it’s mixed up and it’s malleable, it won’t support itself very much. So what do you do to hold it up?… It’s a discovery…it’s not just an exercise.”

Begin with rolled-out, flat, and wet or moist pieces of clay (you can roll them out by hand-tossing or using a rolling pin or slab roller). Soft slab naturally warps and bends during the making and firing, so roll out the slabs on each side repeatedly. Stack with a smooth and wrinkle-free material in between each slab to prevent any tearing or distortion. Then cut each individual piece into shapes, and connect or form them into an object. Score and slip the joined areas to ensure the object will dry out without losing its form.

Use only dried and firm slabs of clay for this technique. Once the clay is leather-hard, cut out your pieces and join them by scoring and slipping. This technique offers less warpage than soft slab construction.

Hunter-gatherers of the Jōmon period (ca. 10, 500–300 B.C.) in Neolithic Japan built pots using the coil construction technique. In fact, the word “jōmon” derives from “cord markings, ” a term that describes layers of soft, coiled clay. As Jōmon ceramics are some of the earliest-known examples of pottery in the world, scientists believe the Japanese were influenced by Chinese techniques, since the Chinese originated the world’s very first pots. Jōmon women would undertake the laborious task of mixing the clay, creating the coiled pots, and firing them in an outdoor bonfire. The style of Jōmon pottery was incredibly diverse and evolved considerably across some 10, 200 years. The earliest vessels were low-fired and simplistic with small bases that were either pointed or flat. They were used for boiling water. But as the kiln evolved, enabling pots to be fired at higher temperatures, ceramics grew more intricate, with ornate decoration on the rims of vessels used for ceremonial purposes.