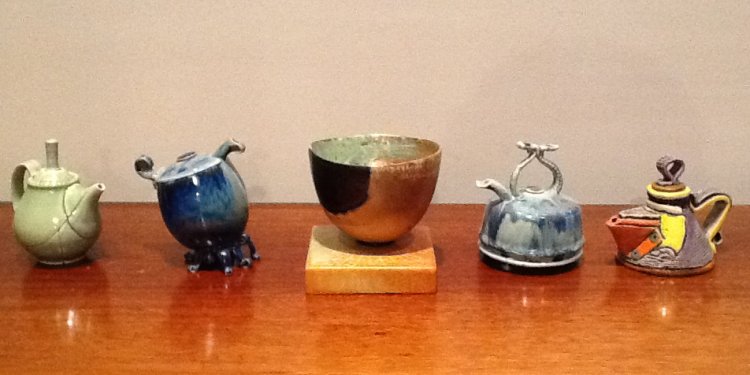 I had two students make tromp l'oeil food sculptures. They used plates as slab molds to make the base and then used several techniques to create the look of the food. There was SO much detail put into these two projects. The curly fries were made by cutting a slab into skinny strips and curling them so they would maintain the square edges. The fries were fired separately so they could be dipped into glaze and fuse in the last fire. The cheeseburger was made from slabs and coils. I saw a lot of thought go into which glazes to combine to create the desired effects.

The stack of pancakes was originally going to be a box with the berries acting as a handle.

There was a little blowout in the bottom during the bisque fire so the student glazed it together to just be a hollow form and I found some felt with a sticky back to add to the bottom to disguise the chips.

One of the most fun parts was figuring out how to make bacon! We rolled coils of red and white clay, stuck them together, flattened them, and crimped.

The football below is a bank made by a freshman. The mask was made with a mold I got for a project through Donors Choose. The student achieved a really cool texture by applying and wiping away glazes.

The next project was made by a senior who joined art second semester. It was inspired by Skyrim. I don't think the student had ever taken art before and I thought he did a really nice job. He layered multiple glazes and the blue eyes were made by melting stained glass into a depression.

I received some underglaze pencils for Christmas so I tested them futon a plate. I learned that they can smudge a bit from brushing on a clear glaze so I'm trying to work around that but I think there are a lot of possibilities and I'm looking forward to offering it as an option in the coming school year.