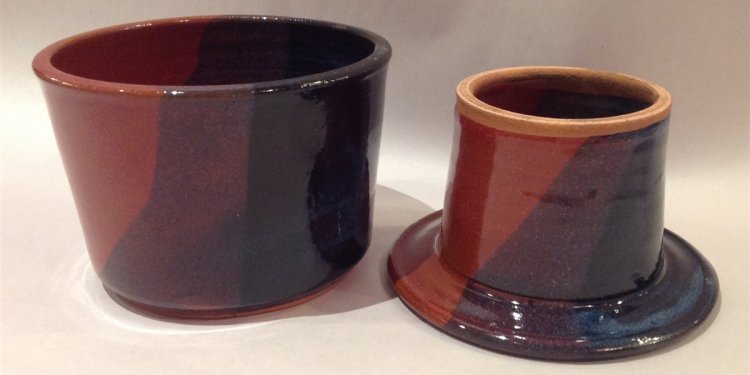 I have been making and selling pottery since I graduated from Portland State University with a degree in Ceramic Arts in 1973. Since then I have sold most of my work at the Portland Saturday Market in Portland, Oregon and at various summer craft fairs

In the late 1970s customers started asking for French Butter Dishes. They or someone they knew had seen one at a craft fair. At first I had no idea what a French Butter Dish was. I found one in a local arts and crafts boutique, copied the basics and created a hand crafted butter dish design of my own. Soon it seemed that every potter I knew was selling their own version.

By the late 1980's very few other potters were still making them. Sometime in the early 1990s I realized a lot of my French Butter Dish customers were buying them as replacements for ones they had lost or broken. Many customers said they had been searching for a long time.

As a board member of the Oregon Potters Association I was given the job of creating a web site for our organization in 1996. After building the OPAs web site

www.oregonpotters.org and its sister site www.ceramicshowcase.com I realized creating a French Butter Dish site would be a great idea. At that time no one was selling any on the web.

Interestingly enough most people I have met from France have never seen one, although I once sold one to a American who bought one in France and wanted a replacement. There are authoritative sources that say the French Butter Dish was invented in Normandy or Brittany in the late 1800's. Both regions were famous for butter production at that time. One authority believes the French Butter Dish was invented in Vallauris.

My butter dishes are handmade on a potter’s wheel. They are made in two parts. The bottom is thrown into a simple crock shape. When making the top, after the clay is centered, the wall is split, the center is pulled up into a cone shape, the outside pulled out to form the lid rim. After the clay is leather hard (½ dry) both the top and bottom are trimmed to form the top of the lid and the smooth base bottom. The clay is then dried, fired to a low temperature (cone 05), cooled, glazed and then fired again to a higher stoneware temperature (cone 10 or 2426F) That cone shaped lid is the key to why a handmade French butter dish works best. A cone shape can hold a larger amount of butter. It is harder to manufacture a lid with this inverse shape. When manufactured versions came on the market in the late 1990 (like the Norpro Butter Keeper and the Buttr Bell) they had to have a smaller open cup shape.

For the first 3 or 4 years my web site was the only one you would find when searching for a "French Butter Dish" or any of the other names associated with this style of butter crock! The French Butter Dish has become extremely popular again. My site is joined by many others, happy to provide a product that more people are discovering every day.

Dress your social network pages up before applying to the job. It should not surprise you but still, did you know that there are more than 93% of your future recruiters, who will find your profile on a social network to learn everything about you! Furthermore, if you are not familiar with rekruttering, try Twitter. More than 8,000,000 people found their jobs there.