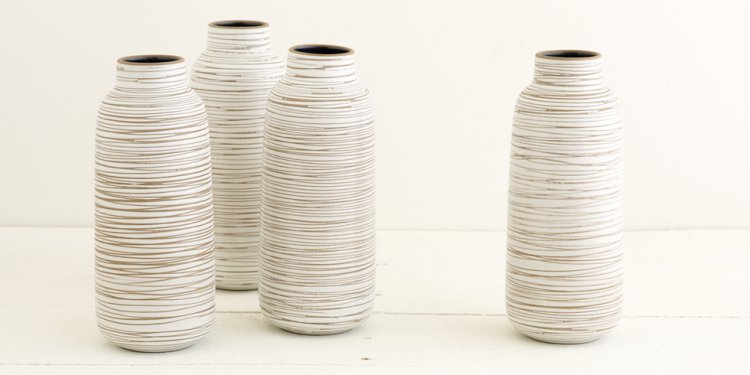 Once the pot becomes leather hard, I draw patterns and motifs on the surface. After placing the pot on a flat surface, a guiding vertical line is drawn between the rim and bottom using a soft 8B drawing pencil and a clear flexible ruler. Starting at the guide line, the rim is then divided into twelve sections using a decorating disk (figure 1), and the bottom of the body is also measured into twelve with compass dividers (figure 2). Here is when more complicated design work starts. First I draw the vertical lines connecting the points at the rim and foot to separate the surface into six planes.

Adam Field spent about a year in Icheon, South Korea, studying traditional Korean pottery making techniques under sixth-generation Onggi master Kim Il Mahn. Taking this training and blending it with his Western skill set, Adam presents the perfect blend of techniques suitable for anyone wanting to improve their throwing and carving techniques in his .

Next, starting from the rim of the goblet, I measure the distance between two of the lines (usually 1 inch) using the dividers. Keeping this measurement, I make a mark that is this distance down from the rim on the vertical line. I place my dividers on this new mark, measure between two of the vertical lines again, (the measurement becomes slightly narrower) then use the first mark I made on the vertical line as the starting point and mark off this new distance further down the line. I repeat this process, measuring the distance between the vertical lines at the last mark made, then continuing to mark off the corresponding lengths down the vertical line until I reach the middle of the goblet. Changing the size of the horizontal spacing by small increments creates a scale shift in the divisions and subsequently in the patterns that I create based on the divisions. The scale of the repeating elements decreases as the diameter of the cup decreases. Continue to measure the incrementally smaller divisions between the vertical lines and marking this distance on the vertical line, starting at the rim and working down, and finishing when the dividers meet the bottom of the cup (figure 3). Once one section has been marked off, transfer the marks to the other vertical lines. This method for measuring is usually pretty close each time, but even if this drawing process is slightly off, I can adjust the distance as I connect the marks diagonally for diamond or weaving patterns (figure 4) or with concentric circles for waves.

For diamond patterns, once I reach the middle, I alternate the decorating panels to create open areas for variety (see figure 5). Carving and Finishing After I draw patterns on the surface, the piece is generally at the hard to leather-hard stage and it’s time to carve! Using small triangle-shaped trimming tools, I patiently carve out the surface one line at a time tracing the lines that I drew. Some straight lines, such as the window shapes, are carved without lines by using the width of the tool as a guide (figure 6). The diamond pattern is carved away to create a recess starting at the bottom point to about the vertical middle of each diamond, creating visual and physical depth (figure 7). After the...